A Desperate Union
The fate of an embattled country hinges on the hope of a forlorn plea. 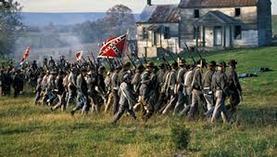 What if the American Civil War was conjured by an evil outside the borders of the United States?

As tempers flare between the issues of states’ rights and slavery, bloody battles scar the countryside and bleed the United States of thousands of lives. In 1863, amid the Confederacy’s bravest push into the northern states, Union spies uncover a most wicked plot to destroy the United States; a plot seeded by foreign agents desiring to see the country crumble.

While overseas powers are poised to enter the conflict, President Lincoln mobilizes urgent negotiations to seek peace with the Confederacy in hopes of quelling the terror looming against his entire nation. Can the battling armies set aside deep seeded bitterness and join forces to destroy the true peril vying to crush the United States, or will the swelling madness annihilate them all?