Enemy in the Ranks
In the Union army, the enemy doesn't always wear gray. 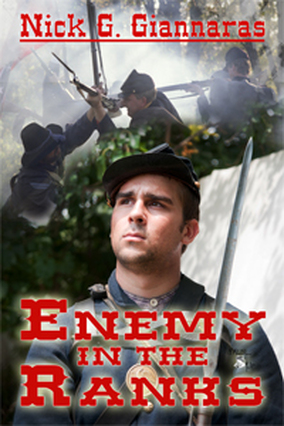 When Emory Gilroy donned the blue uniform of the Union army, he expected to battle against a gray clad foe. Instead, he entered a private war versus a wealthy attorney turned officer whose goal in life was to destroy Emory and his family.
During the bloody Virginia campaigns of 1864, Emory and the 83rd Pennsylvania suffer through horrendous combat, inhumane living conditions, and mental hardships capable of destroying any man’s spirit. Emory’s faith, torn asunder by the brutal reality of war, is renewed after realizing his beloved brother, fighting for the Confederacy, may still live.

Despite his efforts to find his sibling amid dreadful circumstances, Emory is embattled by an enemy from two fronts; the Confederates and his hometown nemesis. Who presents a greater threat? And will Emory find his brother before becoming a statistic in this terrible conflict?